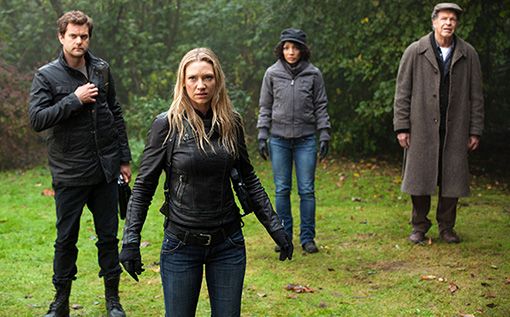 The Day The Show Dug Deeper Into Its Contrived Sci-Fi Hole, is more like it.

Joshua Jackson finally starts to act a little bit in Friday night’s season finale of Fringe. His usual [bad] Fox Mulder-rip-off mumble actually disappears for a short while when he expresses loss, regret and excitement for possibly the first time ever since the beginning of the show in 2008. We won’t bore you with spoiler details, but this really isn’t the interesting aspect of the finale.

The Observers’ role in the show returns into view after a Lost-like time-warp occurs as seen at the end of the previous episode and drags us through a steampunk fashioned what-if future version of all our favorite characters. The writers are obviously having fun, but sadly at the expense of their audience. Just like the season two finale, the storyline is rushed so much that I’m pretty thankful I gave up considering this show a worthy watch last year.  While the whole of season three has been….interesting….there is pretty much nothing going on that resembles the first season at all.  The writers have basically completely ditched the “monster of the week” fun that gave us the MIT time-travel transhuman, the teleporting German, and of course all the mystery behind Massive Dynamic and the plot to destroy the universe by the underground terrorist cell.  In fact, I can say with confidence that as soon as they revealed the answers to all the mystery I lost all interest in the show.  Now, the show has become a smorgasbord of how far they can take the plot (not far at all) instead of using the mystery they once had to intertwine all sorts of common questions about the universe we all have to slowly unravel the plot. I’m actually really saddened by the whole thing and have decided that there’s a difference between J.J. Abram’s awesome interest in puzzles, sci-fi, conspiracies and the unknown and his ability to produce a good show. Undercovers is a good example of the thoughtless crap he is capable of attempting and failing at.  And at this point, I think it’s safe to say the only exemplary show he’s had a hand in is Lost, and that is probably because he had the help of better producers and writers than himself. (Honestly, J.J., just because you’re rich doesn’t mean you have any talent. Try a writing class or even borrowing a book on it from the library once in a while. You’re not a bad actor, though — your performance in Six Degrees of Separation was pretty great — you should have stuck to that).

The one thing that keeps me watching the show is John Noble’s two characters and performance. This is clearly one of the most talented actors of our time and the only one on the show that never gives a bad performance or loses his character. The possession of Olivia’s body by William Bell was an interesting concept, but Anna Torv’s performance of it was only C+, while her return to natural Olivia ended up being irritating at best.

All in all, they’ve destroyed this show and it’s an utter surprise that it’s gotten renewed. I’ll still watch out of curiosity, but only if I happen to catch a rerun. D –