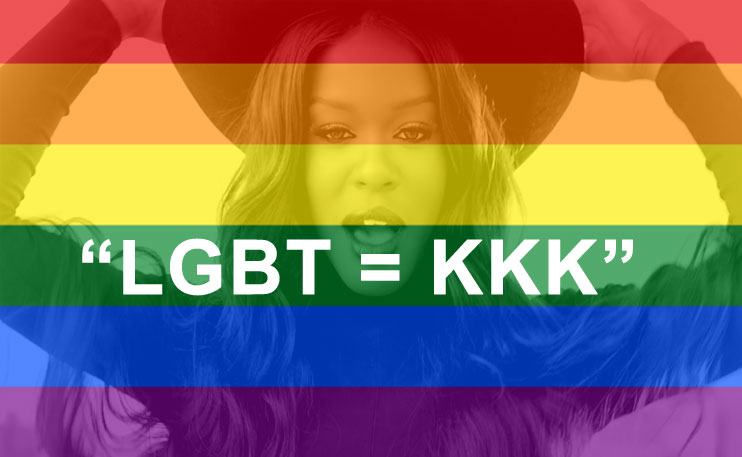 In probably the worst PR flop a pop singer could make this day in age, Azealia Banks took to twitter the other day to say she felt the LGBT community is “like the gay white KKK”.

Let’s say you’re a woman. A bisexual woman. And let’s say you’re also African American and a musician. You probably have a lot of pent up rage that could send you into a rapping frenzy at any moment. When those lyrics are spit, you probably use poetic license to back up your right to free speech, and you probably get away with it most of the time because music is an art form and art has a long history of being radical and challenging the system we live in.

But when you say something on Twitter, you aren’t appropriated a poetic license. Twitter is a communications tool and, unless you’re known for shocking performance art involving social media, you should probably watch what you say. After all, it wasn’t too long ago that Anthony Cumia of the Opie and Anthony Show got fired from Sirius XM for his racist twitter tirade regarding a black female who assaulted him in the middle of the night in Times Square after he took pictures of her butt. If entertainers should have learned anything from that event, it’s that the things you say online under your own name will be held against you in the court of public opinion. Why, then, would Azealia Banks say such a thing without thinking?

Probably because she’s an idiot.

She removed the original tweet, but here’s a screenshot:

Afterwards, she received some backlash to which she responded the following typical backpedaling we always see from pop stars with below average intelligence:

There is so much wrong with these tweets, I’m not sure where to start so let’s just take it from the top..

“All I had to do is say one word and I moved a whole community. What weaklings!!!”

So, you moved a community and you think that makes them weak? Last I checked, weakness is when people do nothing in the face of bigotry…

“You boys gotta toughen up!!! Don’t be so weak !!! If one word can put your entire community in distress you’re DOOMED”

The thing is, not all people are the same. Some people are sensitive. That’s part of being alive in a society where divergent lifestyles, cultures, races, religions and personalities exist. Being insensitive to words that hurt people with access to the internet (such as gay fans, perhaps?) means you don’t give a hoot about anyone but yourself. It’s called “tolerance”, Azealia, learn it.

“You all CHOSE to get upset. Remember… Offense is only TAKEN, it is never given.”

This is some immature thinking. I used to think like that, too. I also used to think it was OK to hit someone when they wouldn’t stop taunting me. See, I was in middle school. I’m 36 years old now and made enough mistakes to know that violence doesn’t solve anything and only makes things worse. The same goes for saying shitty things on a loud speaker in front of THE ENTIRE WORLD. How old are you, Ms. Banks? 24? Maybe I’ll give you a pass….for now….

None of this is shocking at this point, as Banks has been on somewhat of a rampage with her gay bashing and proclamations that she should be able to say whatever she wants. After an altercation with a flight attendant caught on video where Banks called the attendant a “F*cking F*ggot”, she tweeted that she was bisexual, that her brother was transsexual and that her employees were all gay men:

This type of behavior is residual from decades of gay bashing that made the word “F*ggot” a pejorative for not just gay people but anyone you don’t like, a topic that became a bit in comedian Louis CK’s arsenal from his Chewed Up stand-up special in 2008. While it works as a comedy routine in his special way of getting around actually offending people, he also brings the word to reality in the second episode of his hit TV show Louie on FX when a group of comics are sitting around playing cards and the topic comes up when one of them, Nick DiPaolo, asks a gay comic at the table, Rick Crom, what it feels like to *ahem* receive anal sex. Crom goes on to explain the emotional pain that the f-word brings back up. See, in the Middle Ages, a “faggot” meant “a bundle of sticks to build a fire” and, since society felt gay people were so sub-human that they equated to fire kindle, they would throw gay people on the fire instead of strapping them to a stake with the witches. Yea. It’s that horrible of a slur. In fact, it’s as bad as saying the n-word to a black person.

Unfortunately, Azealia Banks doesn’t think so. She thinks it’s totally OK to say whatever you want, which is great, but she should also, maybe, perhaps censor herself a LITTLE bit… at least when using twitter.