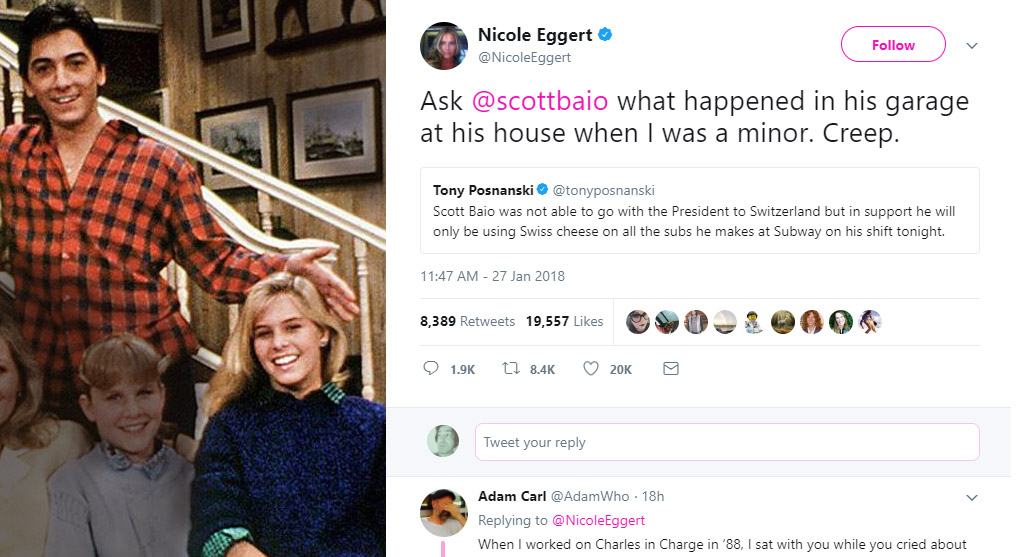 In a string of tweets, former star of 80s sitcom Charles In Charge Nicole Eggart said that Scott Baio who played Charles had been continually molesting her in his garage between sets

Nicole Eggart, now 46, told the twitterverse that Baio had sexually abused her in his garage when the pair were off duty between shoots, starting when Eggart was just 14 years old and ending when the show ended and Eggart was 17.

Ask @scottbaio what happened in his garage at his house when I was a minor. Creep. https://t.co/YrQydBKd0a

After the news hit major media outlets, Baio took to both Twitter and Facebook in response to the allegations and claimed that he had “proof” that Eggart was lying. In a video on Facebook Live, Baio showed documents including cease and desist letters to Eggart, a photocopy of a Charles in Charge script, and emails from the Dr. Oz show asking for verification of stories by Eggart, to which Baio did not address. Baio also played a tape of a phonecall between Eggart and a friend where she admitted to asking Baio to take her virginity “long after” Charles in Charge was off the air (circa 1990) which would have made Eggart around 18 or 19 years old.

However, Eggart is not making the claim that Baio had sexual intercourse with her when she was underage, which makes the tape virtually irrelevant. Eggart’s claim is that Baio “molested” her when she was “14, 15, 16, and 17”, however she posted this information in tweets that have since been deleted.